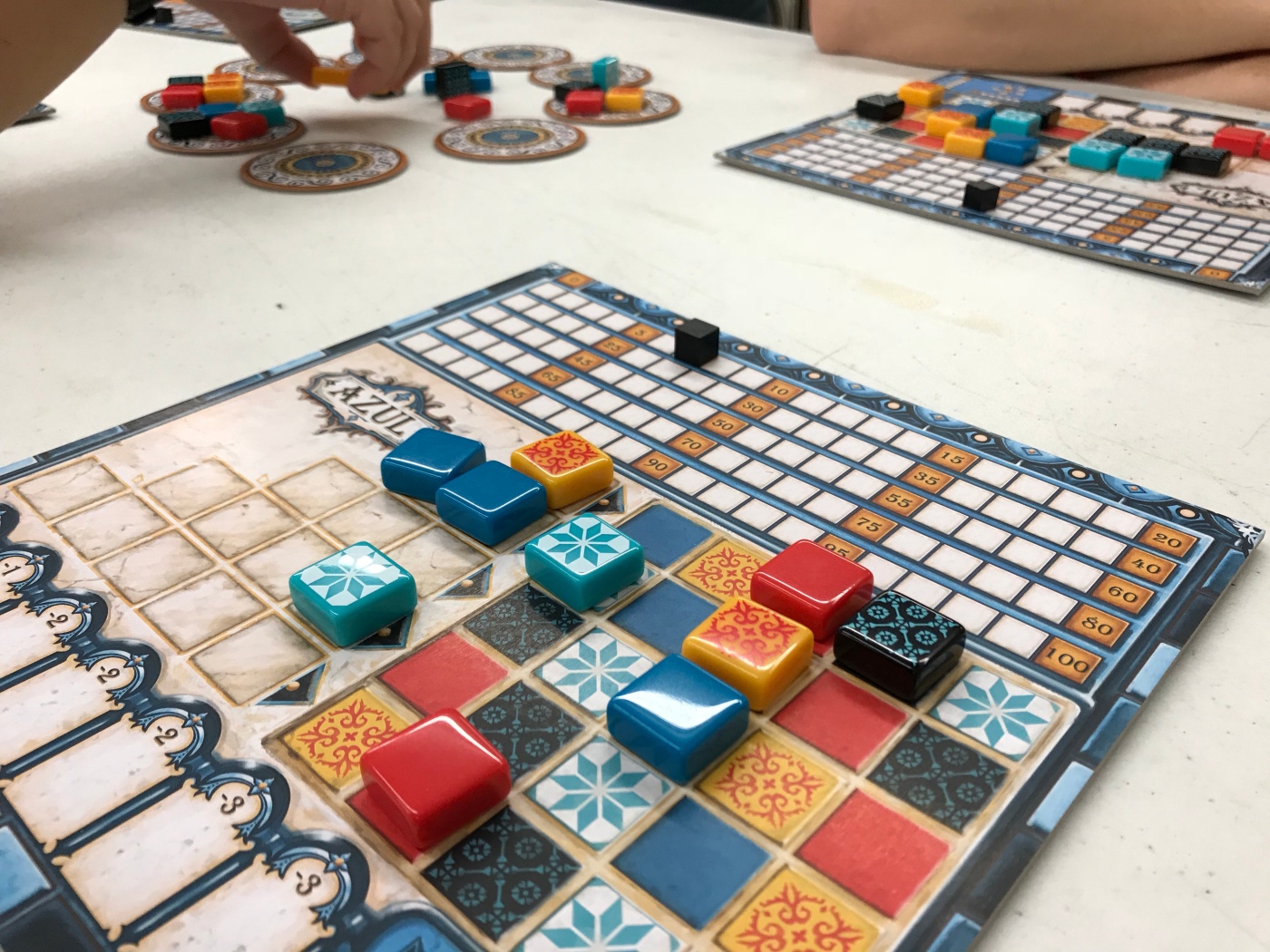 For weeks, I have heard a growing chatter storm about a tile laying game that looked beautiful on the table. Azul, from Plan B Games, has been ridiculously hard to find, but Gamenerdsz, an FLGS out of Dallas with an internet presence, had some in stock right around Christmas at a good price. So I snapped it up!

Does your group like tile laying games? Have you played Qwirkle with your family, but wish there was something with a little more depth?  Then, spice up your game nights with Azul.

Azul is a 2017 release from Plan B Games designed by famed German designer, Michael Kiesling. If you are new to the hobby, Kiesling is a giant among gamers especially in partnership with Wolfgang Kramer, with whom he has won Germany’s top prize, the Spiel des Jahres not once but twice for Tikkal and Torres .

Azul carries a simple premise. The King of Portugal visited the royal palace in Spain, and came back impressed with the wall tiles he found adorned there. He has commissioned you and up to three other players to decorate his own palace with similar art. Whoever does the best job of designing the wall — i.e. scoring the most victory points — is the winner. 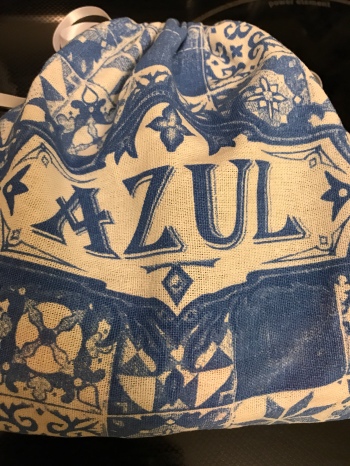 The gameplay is simple with some twists.  Players take turns drafting five different colors of tiles randomly drawn from a bag.  They do not choose them straight from the bag, however. Instead, the tiles are placed in groups of four on available slots (affectionately called “coasters” by the Draft Mechanic Podcast).  The trick is that if a player selects a color, they must take all of the available tiles of that color off of the slot, and fit them on the player board, moving the remaining tiles to the center of the sales area. Those tiles are then available to other players with the same restriction: if they take any tiles from the center, they must take all of the same color. The first player to take tiles from the middle gets to be first player next round (with their best choice of colors) but loses one point at the end of the round.

You can smell the delicious decisions from here. Do you take that color that you really need, which exposes colors other players may need in conjunction with others left in the center? Or do you “hate draft” colors that help you, but hurt other players more? Or do you grab some center tiles just to get the first player marker so that you can set up your best move? Life’s full of tough choices, isn’t it? 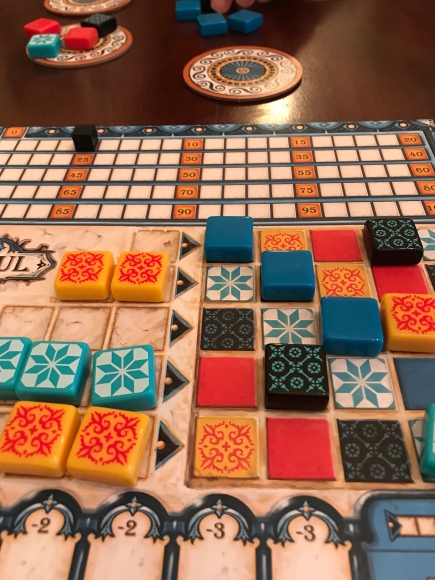 And that’s just the first part of the round. Once all of the tiles that have been drawn out of the bag are chosen, the game moves quickly to the placement phase. This is where players will attempt to move the colored tiles that have filled up their player board lines onto the wall decoration. The scoring is very simple — when you move a tile (because you can only move just one, the rest in the line are discarded even if you move a five tile line), you score as many points as that tile connects to other lines.  Of course, there are bonuses at the end of the game (which is triggered when all five slots of any one particular row are filled), and players should be careful to watch for those opportunities, too.

For an abstract, the game is very thematic in that the tile colors and the movement of the tiles does feel like you are building an historic Portuguese display. And there is a cool mechanic that if you cannot fit one of the tiles you draft onto one of your building lines, those tiles “fall off” of your “wall” and score you negative points. 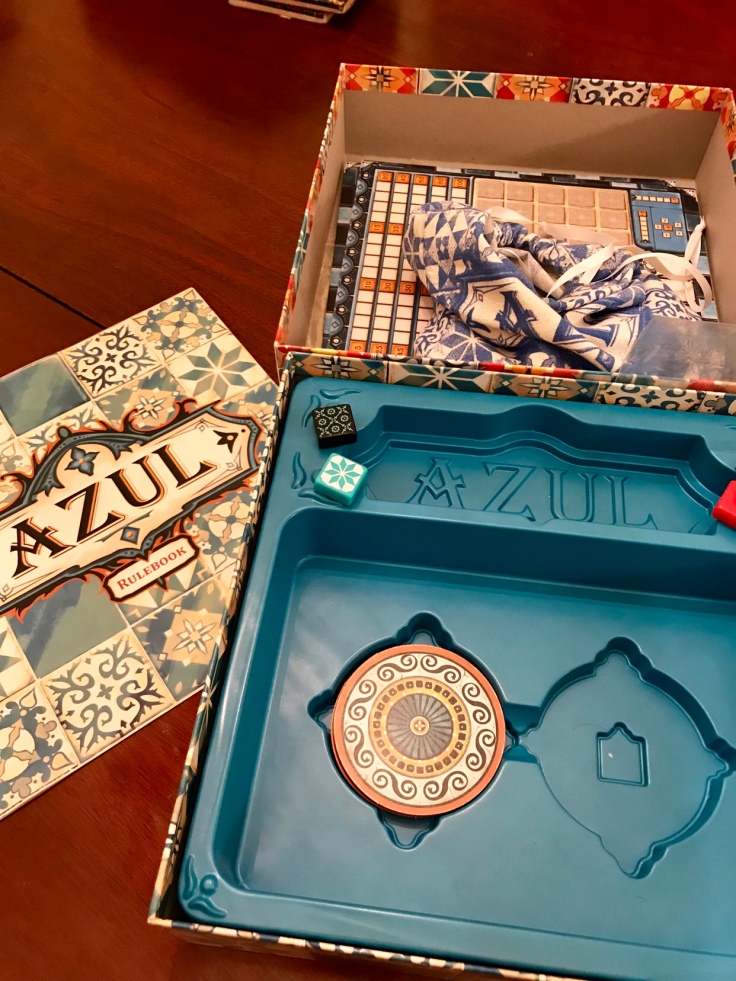 This is the third Plan B game I have played, and the production value continues to rise. I must admit, I was very impressed with the package I received. The cover is a gorgeous reproduction of the Azul theme (which we are told is taken from the name Azulejos, the Portuguese word for the original blue and white ceramic wall tiles).  The box itself comes with a plastic insert that rivals some of the better third party inserts, and is perfect for storing the tiles, player boards, and scoring markers.  When you set this game down on the table, and break out the components, you will get some appreciative nods.

The central question for any game purchase is whether the game is fun.  Azul is one of those games that I was sure I did not need.  I have plenty of abstract games, some that are very near and dear to me like Ingenious. I like simple play with just enough player interaction to turn it away from four player solitaire.   I have plenty of tile laying games — that is one of my favorite mechanics.  If a game is going to come into my collection, it better top the gameplay of one of my other beloved tile laying games. 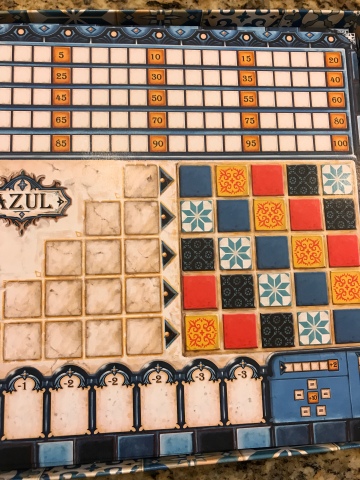 Azul does all that and more. I frankly was surprised at how much I enjoyed my first game, which quickly turned into a second and then a third. Since then, the game has been enjoyed by my family, especially my wife, and I even broke it out at our scout game night where it was a big hit.

We recently hosted our annual Gumbo New Year game event, and this year, I had some guests who were absolute newbies to the hobby. I was worried that the jump up from the simple mechanics of Qwirkle, where you basically just draft a tile and find a spot to place it, would be a little too much considering the company and the occasion, but boy was I wrong. The guests took to it like nutria to water, and I had a great time being beaten pretty soundly.

I think it is the simple game play yet thinky decisions as to when to draft tiles and how to set up a big score that has people coming back for more.  Azul is a game that I can see staying a very long time in my game closet.

So it has been a few weeks since I have purchased Azul. I have brought it to the table many times now, and I had a revelation after playing it so many times back-to-back, a revelation that has led to intense debate among the Krew de Gumbo.

I offer the following statement: Azul is the perfect Splendor replacement.

Why do I need a replacement for Splendor? Well, I don’t really *need* one, but there are not many members of my various game groups that really get excited about playing Splendor anymore. We’ve all played it dozens and dozens of times, and most of us own the app — meaning we have played it perhaps hundreds of times by now.

So, the search has begun to find a game that we can set up quickly, has a great puzzle aspect to it, and we can play even with non-gamers who show up for the first time at Gumbo Game Night. Azul seems to fit.

But, not all of us agreed. One of the members of the Krewe de Gumbo finally played Azul last week, and said he is not seeing where all the hype comes from. He agreed that is is in the same ballpark as Splendor, a nice light and quick game, but thinks it is over hyped.

My counters to that are pretty simple. First, the production of this game is ridiculously good. There are just not many games that give you better production value all for around $25-30 street price. The tiles are chunky little pieces, the box itself has that pre-made plastic insert I described above that fits all of the game easily. The artwork on the box and instruction booklet is gorgeous. Plus, they threw in a beautiful tile bag with the inscription of the game on it. Overall, this thing will look very impressive on your game table.

But why does it fire Splendor in my collection? Well, gamers are are always looking for games that they can teach to newcomers, yet still have enough meat on the bones to attract regular gamers. Azul fits that description to a “T”.

But my friends wanted to compare mechanics and draw a big distinction between the two games. At its heart, Splendor is an engine builder, and Azul is a completely different animal.  There is no real engine building in this game, they say.

Plus, some of the Krewe claim that to “fire” a game, the new game has to be a direct improvement over the game, especially the game mechanics. If there is no reason to play the old game ever again (except maybe for nostalgia purposes), then that game is fired.  If they want a simple engine builder to teach the concept, Splendor does the trick, and if they want a simple tile laying game that looks good on the table, they use Qwirkle especially with new gamers.

I think they have missed the point. Yes, they are completely different games, but a game that fires another in your collection does not *necessarily* have to be a clone, does it? That’s not what constitutes “firing” in my mind.

Instead think in terms of what Splendor does in my collection. It’s that game that I know I can teach people if they enjoyed Ticket to Ride or Carcassonne or Catan. Yes, it’s an engine builder but that’s not really the attraction. It’s the simple mechanics that hint at deeper strategies that grab people.

These are good points, but I don’t think you have to limit yourself to direct comparisons between Azul and Qwirkle/Scrabble. For reasons I will discuss below, I think it is fair to compare Azul to games like Splendor. In fact, in many ways, Azul is closer to Splendor then Scrabble and Qwirkle and fires both of them.

The mechanics of Qwirkle are simple, as players just randomly draw tiles from a bag.  Splendor and Azul share a more complicated system for getting resources (cards or tiles) into your hands. Plus, Splendor and Azul have open info AND strategy as to when you draft the cards or tiles. Taking one card / tile leaves others open.

Plus, Splendor shares the “saved resources” mechanic with Azul. That is not present at all in Qwirkle. In Splendor, players have gems that are permanent to their resource supply once the proper cards are placed.  In Azul, there is a form of this as colors that are played in one round can be saved from round to round to build up enough to close out a row.

Finally, Qwirkle has no real bonus system. Yet, a key component of both Splendor and Azul is how you strategize your play with the bonuses of the nobles and geometric bonuses, respectively.

I think that lays the best case as to why Azul, which does all of those things so much better than Splendor and Qwirkle, fires both of them in my collection.

Do you agree?  Does Azul fire other games like Splendor or Qwirkle in your collection? Let me know in the comments below, or send me a tweet @boardgamegumbo. I’d love to hear from you.

2 thoughts on “Spice It Up! with Azul”