My dad was a child of the 50s. He grew up in the era of Sputnik and Glenn and watched America’s space program look further and further outward. His interest was my interest, too. But while the practical issues of space travel were interesting, it was the 1930s pulp space fiction that really caught both of our eyes.

Dad loved talking about Buck Rodgers, and I think like many of his age, his idea of science fiction was the same sort that surfaced in those old space operas. Plotlines were usually good characters battling evil alien species bent on eradicating the human race. Colorful artwork filled the pages with curved rocket ships and laser guns blasting through the aether. I, too, got lost for hours reading “Have Spacesuit, Will Travel” and other classics of the era.

Does your game group love that pulp space fiction aesthetic? Do you like tactical war games with a good American style thematic game experience rather than a true war simulation?

If so, then Spice it up! with Rayguns and Rocketships from IDW Games! 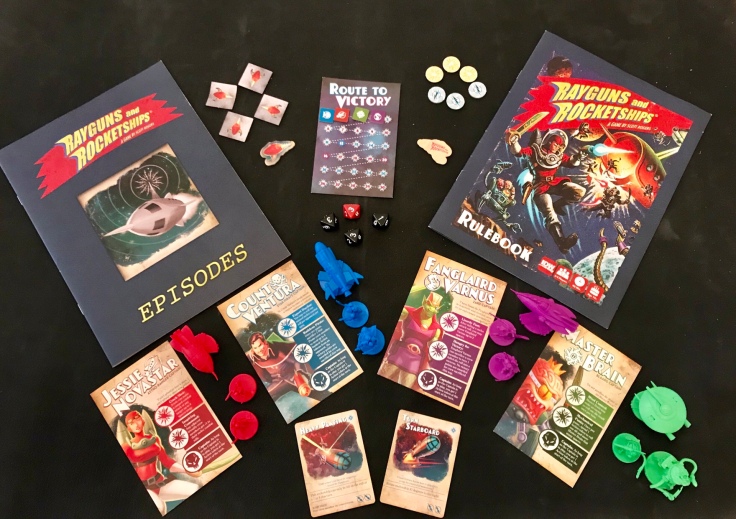 Rayguns and Rocketships is a unique action strategy game where the action in the game is both with ship to ship combat across a space map, but also tactical combat between space heroes that battle on the map and on each of the other starships. Players program their fleet to take actions across the galaxy, and use each player’s special powers and the powers they gain through the use of the programmed cards to score victory points by defeating the other players or by completing card requirements.

Rayguns and Rocketships is designed by Professor Scott Rogers, of the Dice Tower’s (and now Ludology’s) Biography of a Boardgame segment, an accomplished video game designer in his own right. Rogers was the lead designer of the video game hit, “God of War,” and is also an adjunct professor of game design at USC and at the New York Film Academy in Los Angeles. IDW was kind enough to provide us with a review copy of this game.

Rayguns and Rocketships is essentially a tactical space battle game, played through a combination of card play giving movement and special powers. It is unique in that it visualizes battles and maneuvers in space as well as on micro level on each player’s ship, with dice rolling for combat. 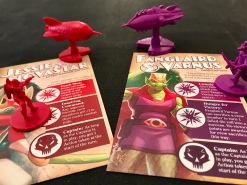 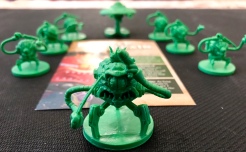 Players will take one of each of the four factions in the box: the plucky Astrorangers, the devious Space Pirates, the reptilian Zards with their whiplash tails, or the big-brained Blarg. Each of those factions comes with unique figures for their individual crew members, a distinct figure for the captain, and a large space ship figure that is placed on the board.

Players also get a “Captain’s Card” which gives special powers to the faction, so long as the captain is in play or is performing a certain action. These captain’s cards are double sided to give even more replayability. Finally, they are given their ship mat, which is the player board where their crew members will be moved around to man the different stations on the ships like rayguns, engines, control panel and the hatch. This is the map area that will have to be defended when — not if — other player characters send their space buddies to board your own ship. 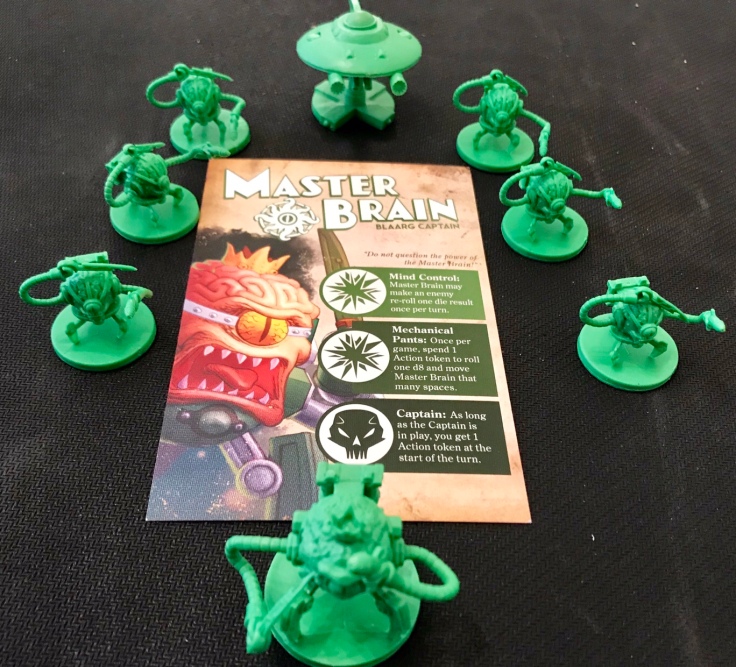 Each player will program three movement / action cards secretly, then reveal them one at a time and resolve the actions in turn order. The turns are simple: move the rocket ships, fire the rocket ships’s rayguns if other ships are in range, and then move / fight with the crew members. This includes the ability to send your crew members on a mission to board the other players’ ships.

Score points each time you take out an opponent’s crew member, captain, rocket ship or ray gun, and also score points for playing and completing special “star” cards. First person to an agreed upon score (like 12 points for a good length of game) wins.

Rayguns and Rocketships blares its place in the world of pulp science fiction. The box cover is colorful and has that weathered look that so many of those books and magazines from this era had. The four factions are familiar tropes in this world, and their representations are well done. It almost seems like these have already existed for many years, even though they spring from the mind of the cardboard creator.

The figures and space ships themselves are well done plastic miniatures. We had a problem with our original box contents, which was provided by IDW as a review copy, in that about eight of the figures were broken. Whether this was from shipping or manufacturing defects was never explained, but after some exchange of communications, we finally had all of our full complement of figures.

The map and the player boards are nice represented, and there are enough tokens and dice for four players to play the game. 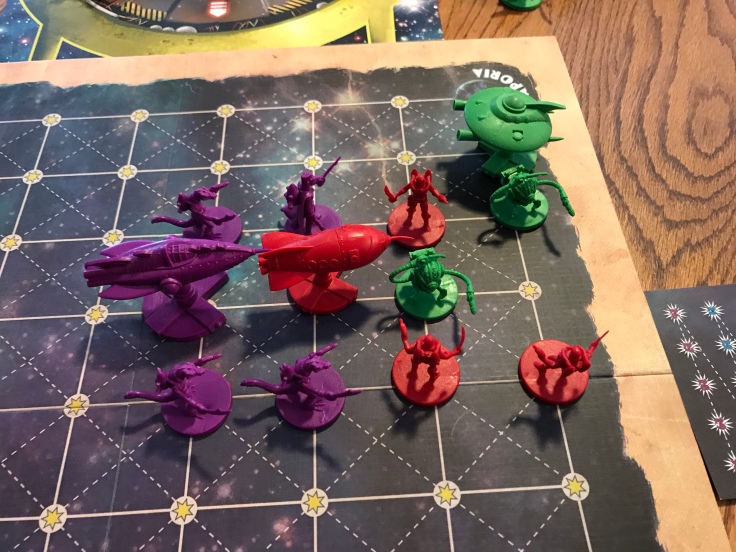 We’ve played the game at all different play counts, and we have to give thumbs up for the fun factor of the game play. Once the factions are chosen, and players started reading the cards (which even have themed names on them depicting the powers that are granted with the use of the card), I could see the wheels turning as to how best to move the ships around and get those crew members into combat.

The space map is surprisingly small, which is not a bad thing at all. Within two turns, your ship should already be engaged and blasting away with the ray guns. Within three or four turns, there should be crew members all over the board, attacking each other and trying to infiltrate each ship.

The decision whether to leave your crew members at their assigned spots, which grants you bonuses like extra movement or better guns, OR to send them flying across the map to board other player’s ships is truly a delicious decision that can pay off with big rewards or leave you defenseless to another player’s attack. Kudos to the designer for building a fun engine clearly not designed to be taken seriously in terms of war strategy but with plenty of tension for anyone that likes tactical combat games.

I especially liked the way the cards and the special powers interacted. Each faction’s powers really seemed to match up well thematically with their units, and the captains have so many cool powers on the front side and back side of the reversible captain’s cards that replayability is probably not much of a factor.

The game was a lot of fun, but there is a large “but”. The rule book leaves a lot to be desired. Two different members of the Krewe de Gumbo tested this game out with various play groups, and the results were the same. Frankly, in our minds, the rule set was one giant hot mess.

A combat game like this using cards and dice for movement and attacks needs to have a certain “flow”, a tit-for-tat that rapidly fires off. Since it is not really a war simulation, and holds itself out instead as a fun look back on pulp science fiction with its quick beats and rhythmic play, the game play needs to be foolproof. Unfortunately, through all of the games, it was necessary to constantly dive back into the rule book to clarify different areas of the play.

Things like line of sight, turn structure, player powers and movement are all not necessarily very well explained in the rules (or are outright missing) and so we felt like we were constantly house ruling the game. That might be okay if we have played the game dozens of times and know what we want to streamline to fit our style of game, but it should not happen on the very first three or six times playing the game.

I do not own or play a lot of tactical battle games — it is just not my cup of tea — and I would definitely want to keep this one in my collection because I absolutely adore the theme, design aesthetics and play style. And I have just the game group in my mind that I think would enjoy game like this — my scout dads and their sons would have a blast taking each other on and figuring out the best way to play each faction.

But, for this game to see the table with any regularity. it would have to be with a revised set of rules that as airtight as a Blarg airlock. 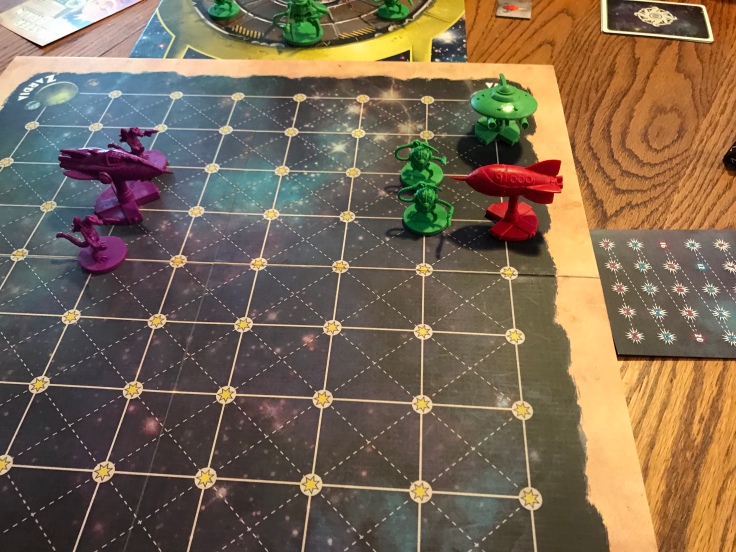 Is this game right for your game group?

It is, if you love tactical mini combat games that have a spice of randomness in the dice rolls, a plethora of unique special powers both in the factions, the captain’s abilities, plus the special cards and star cards, and beautiful minis that look great on the table. .

Plus, the fact that essentially you are playing on two different boards — the main space board and the individual player boards representing their own space ships — will be a big draw to many game groups.

However, if you are frustrated by inconsistent rule sets or even what appears to be missing rules, and do not like house ruling games on the fly, then you may want to shy away from this one at least until the rule set is put in order.

As frustrating as it was to play with the rule sets the way they are presently constituted, all of us agreed that the play itself was fun when it was not bogged down by research and rules questions.

Here’s more from Bryan Barnes from the Krewe who played with us:

Man, Rayguns and Rocketships. This was a game I wanted to love from the moment I saw the box. Space lizards, brain creatures, and space battles. BJ’s review touched on most of the points that are great about the game. Theme, design, and production value. But as he mentioned the rule book is a mess, often not giving solid explanations of rules or not defining terms.

The other big problem that we encountered was how much the game can swing. Because all actions by a player are taken in a round the person going last can find themselves decimated or even not getting a turn as the game state can change or end in the course of other players turns.

If you find these issues to be minor, or are just looking for a game to play for fun and don’t care about the outcome, then by all means pick this one up. It is entertaining and easy to pick up. — Bryan