I stayed up late the other night to watch a 2019 sci-fi thriller set in 1950s New Mexico, an independent film called The Vast of Night, directed by Andrew Patterson. Vast is as far away from a Michael Bay overproduced, action packed romp as could be. Instead of big budget explosions or space fights, two teenagers try to unravel the mystery of strange (alien?) sounds emanating over the radio and what it might mean for their small town.

So much good sci-fi centers on humankind’s use of technology to understand the wider world — and what could geaux wrong in the process of discovery. Vast explores that in depth. Sure, the opening fifteen minutes might be a little bit too wordy and self-indulgent for its own good, but if you love moody, creepy, well-shot sci-fi with amazing dialogue, you need to see Vast as soon as you can, because other than a few stumbles, this picture is almost pitch perfect.

But I did not stop there. I also got a chance to play AEG’s latest entry in The Captain Is Dead series. Right away, I connected the film experience of Vast and the board game experience, even though on the surface there does not seem to be much in common, because each represents one of the calling cards of interesting science fiction: showcasing the sense of discovery and wonder. Exploring otherworldly places generates thrilling moments, even when danger lurks beyond every turn in a cave or crest of a mountaintop or the dark woods outside of town. When a good story involves a krewe of brave adventurers boldly going where no one has ventured before, I am all in.

Does your game group like cooperative games? Do they like a challenge when they play, and are they excited by a sci-fi theme? Well, then, spice up your game night with The Captain Is Dead: Dangerous Planet. 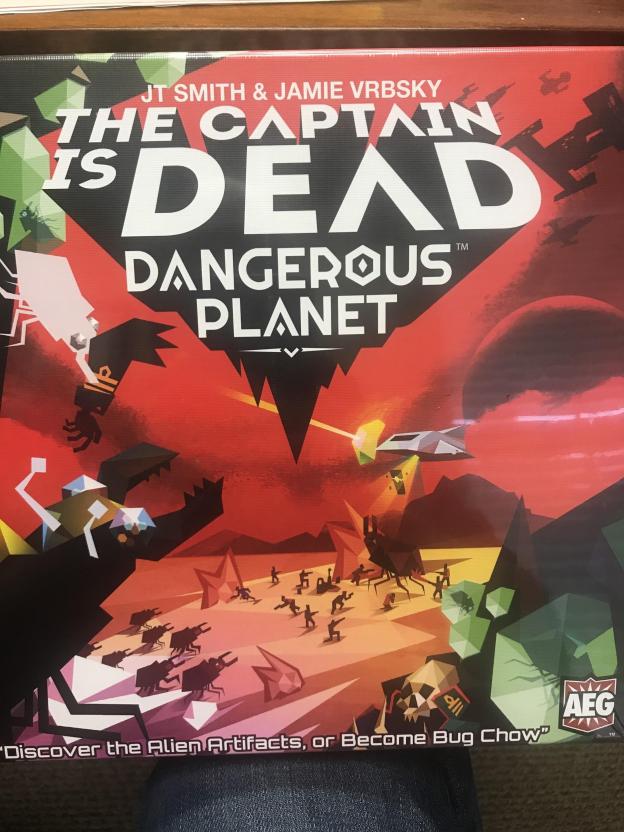 Dangerous Planet is the brand new stand alone sequel to the series of The Captain Is Dead games designed by JT Smith and Jamie Vrbsky, with art from Gaetano Leonardi. It is a cooperative game for two to seven players published by Alderac Entertainment Group (AEG). it is billed as “Episode 3” as the players continue through a storyline that finds them losing their captain, escaping an alien prison, and now, exploring an “abandoned” alien planet.

We published recently an unboxing and overview of the game play by Bradly recently:

I’ll wait while you check out the video, because Bradly does a good job explaining how the game works.  ** Note: AEG was kind enough to send us a review copy to use for the video and this review. **

This is another good production from AEG, something I have come to expect from them. The game comes with tons of stuff in the box: a small game board, lots of cards representing skills players will learn, roles they will play, and the various relics (good!) and alerts (very, very bad) they will deal with as they explore the cave system on the planet. 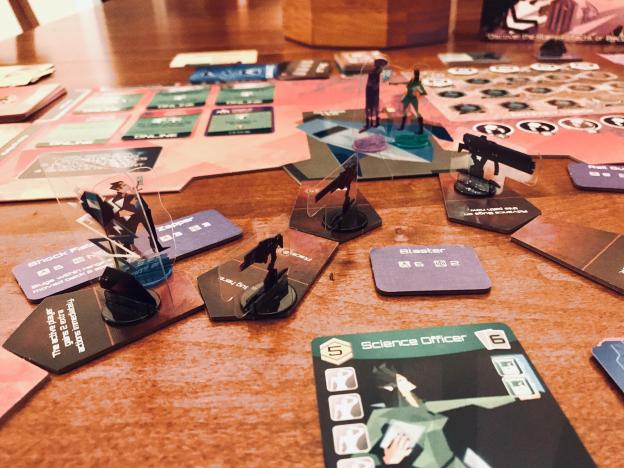 An interesting thing about the production is the use of clear, acrylic standees for all of the roles and weapons in the game. I had complained in our review of the previous Lockdown game about the lack of distinguishability between the acrylic components, but this time, I found that the use of the acrylic standees was well thought out and easily recognizable. The game comes with a number of unique weapons, and each of them is distinct enough to be easily recognizable from a glance. The same holds true for the player roles. Instead of indistinguishable alien standees as in Lockdown, AEG chose to use flat 3D bug tokens, and this was a wise choice.

Instead of a giant game board as we had last time, the designers used one of my favorite set ups: a small board representing the shuttle that the heroes used to arrive at the planet, and tiles representing the tunnels leading to the six alien nests. These are thick, sturdy, double-sided cardboard, representing two spaces on the “board”. Players will uncover the tiles, perform any actions or bonuses listed, and proceed to walk right on through.

The cards are the same type as the last game, namely, sturdy but very slick cards with colorful art on both sides. All in all, this is a fine example of The Gamecrafter’s handicraft.

Dangerous Planet bears a lot of similarity with your evergreen cooperative games, so if you have any experience in that regard, you will do just fine picking up the basics to this game. Players are each given a unique role with a separate hand size limit and number of actions. They will also get a special tool that can be used only twice during the game (mostly for extremely game breaking bonuses that come in real handy when the chips are down.) Each role also has one or two ways to reduce the costs of some of the actions, like researching alien technology or picking up alien tokens. 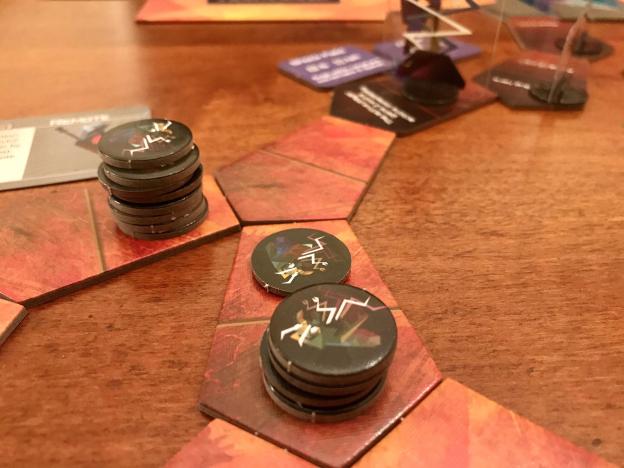 They will take turns using up all of their actions to explore the tunnel system, heal crew members that get injured in a fight with the bugs, grab skills cards (essentially set collection for bonuses, upgrades, better weapons, etc.)

The goal of the game is pretty simple: after randomizing the tunnel set up, the players will take turns using their actions to explore the underground tunnels and look for the technology MacGuffins that will help our civilization defeat the aliens. Sure, I did not quite understand why pieces of alien technology were scattered about a giant naked mole rat hideaway or why I never saw any at the Disney’s Animal Kingdom exhibit, but just roll with it. 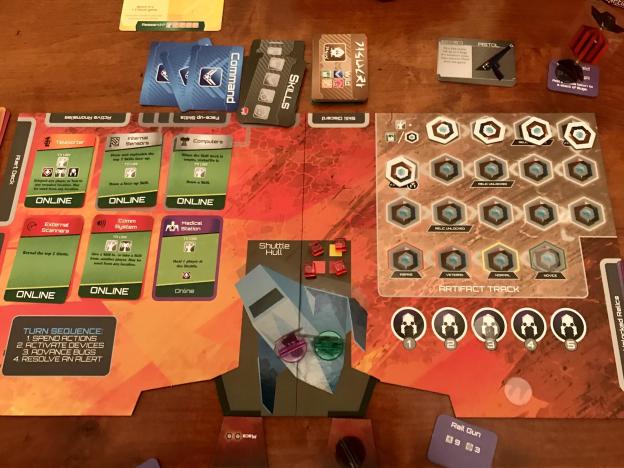 Staying at the shuttle on the surface is very useful, as it is the only way to bring systems on line when problems ensue, and they will. But if the krewe spends too much time on the surface, they won’t find the tech. So, as partners and alone, the krewe must venture out into the tunnels. Flipping over the tunnel tiles can sometimes be helpful and sometimes puts out even more bugs, and since the tiles are randomized, each game will be different.

If you are familiar with the system integration of Lockdown, well, forget the clunky way that systems were taken down, brought back up, and utilized. The designers heard the reviews and have streamlined the way the comm and transport systems work, and it makes for a much more fluid game. The way the game play is crafted, it really feels like turns are more important and decisions produce results.

Besides, you do not want to spend time wiring up electric panels, you want to smash some bugs and find some tech! Get out there, recruit, and explore!

First, let’s get it out of the way — Dangerous Planet is every bit a tough challenge as Lockdown ever was, especially since it has a sliding scale of hardness (I generally play on the normal mode, but there are two tougher modes included). So, if you are looking for a challenging, sci-fi themed co-op that has some meaty decisions in it, Dangerous Planet is it.

And yes, there is still a lot of luck involved in the game to keep you guessing each time you play. The tunnel tiles are shuffled and placed out randomly to connect with the six nests. That means that the game will play completely different every time depending upon how you lay the nests and tunnels out. The rulebook gives you some guidance, but I had fun creating my own little mazes and monsters set ups. 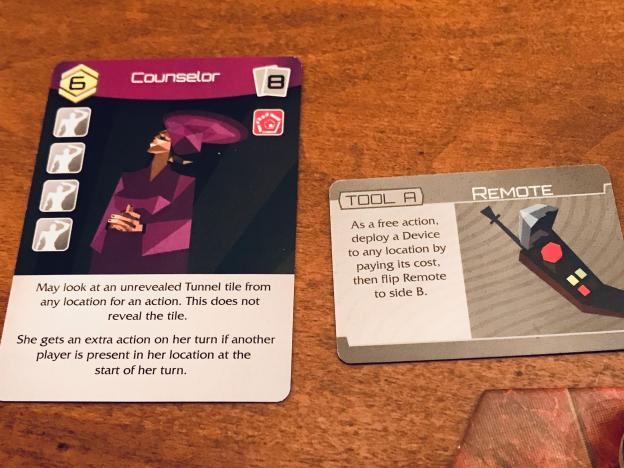 Second, let’s get another thing out of the way — I enjoyed Dangerous Planet infinitely more than I did Lockdown. My main complaint of Lockdown was that it seemed to overstay its welcome. It almost felt like a grinding type game, one of my least favorite activities. Plus, the puzzles were tough to crack, but they seemed almost arbitrarily tough, and luck could really hose you over.

In Dangerous Planet, you still have that build up of tension as the humans try desperately to search for the alien technology that will help them in their fight, and you still have an end game that is going to come down to the last two or three card draws and plays if you want to win. But I really believe that the developers took a smooth chamois cloth to the mechanics in Lockdown (alien actions, injuries to humans, etc) and made them run a lot more smoothly. Sure, I am still annoyed by the way the rulebook is laid out, but maybe because I was already familiar with the system, it did not bother me as much as it did last time. 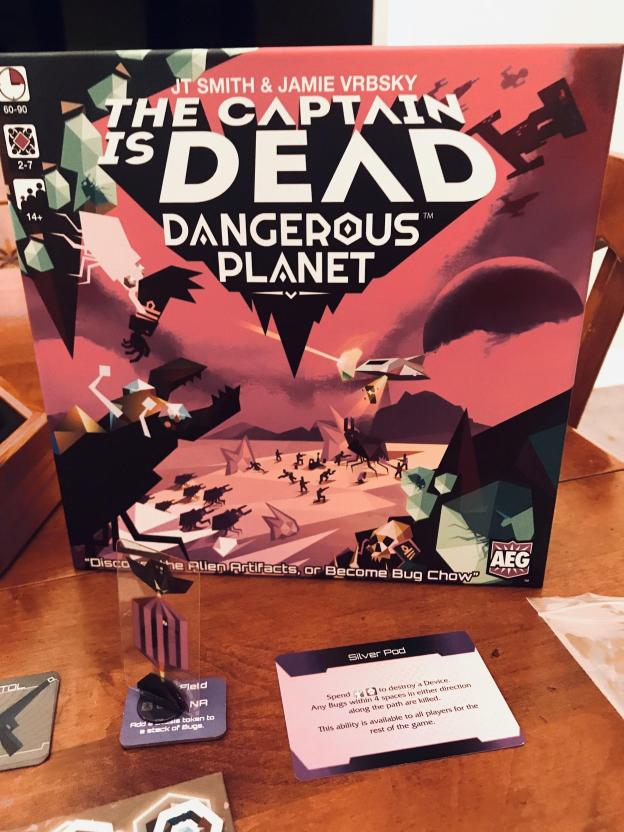 But, maybe the simplest explanation is that the idea of exploring the dangerous and foreboding tunnels on the planet, searching for the alien tech, and smashing bugs with big weapons is just light years more fun than the premise of Lockdown. We had fun trying to create synergy among the characters, divvying up the tunnels and nests, coordinating attacks on the bugs, and sharing technology.

I really like the upgraded weapons in the game. There is something satisfying about placing one of the laser guns in just the right spot, because some of what they do is automatic. The game allows you to feel a little clever in the placement of your defenses, which is always a plus.

If I am going to recommend Dangerous Planet to someone, it would first be someone who likes The Captain Is Dead system and its conceit. Next, I would be happy to play with anyone that likes their cooperative games to have some heft, games that can provide a nearly bewildering array of choices on their turn.

Dangerous Planet requires you to dance with the characters you bring, squeezing out every last bit of efficiency in game play from each character, making sure that each character plays well with each other. It definitely rewards spending a little bit of time prior to the game examining all of the characters and how they may synch up well together.

Explore the world. Get a little wild and dangerous. Pop some popcorn while you are at it. You will be glad you did.